According to last Friday’s regulatory filing by Discovery Communications, in the first year of his new contract, CEO David Zaslav earned $156.1 million, up from $33.3 million in 2013.

According to Discovery’s board, the stock awards “… drive immediate shareholder alignment and encourage long-term ownership of our stock. This contract rewards Mr. Zaslav for the value he has created and the continued strategic direction he provides and requires sustained performance over time for that award to have value. At the end of his contract, Mr. Zaslav will own a substantial amount of equity of Discovery, which reinforces his alignment with our shareholders and encourages long-term ownership of our stock.”

Discovery Communications’ market capitalization has quadrupled since 2007 from $5 billion to $20 billion.

According to Deadline Hollywood’s David Lieberman:

I last met with David Zaslav in Cannes, where he kindly outlined his strategy for global growth just as the US market was peaking. 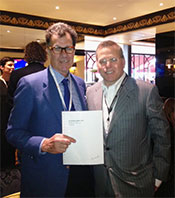 I shared my signed, laminated copy of the cover page of Discovery’s first international business plan, which I had presented to the board: