Discovery Communications’ President & CEO David M. Zaslav sat down with me at last week’s MIPTV for a one-on-one conversation about his company’s strategy and prospects.

He defined Discovery as ‘the #1 platform media company in the world’ with ‘just one strategic goal – to build market share worldwide.’

We talked about Discovery’s global strategy, which has recently diverged from its traditional focus on nonfiction programs.

But would David Zaslav categorize Discovery as ‘a great content company?’

When I sat down with David Zaslav in Cannes, I gave him a handsomely laminated document that sends a big message. It was the cover page and financial roll-up for my 1988 board presentation ‘The Discovery Channel Europe Business Plan.’ 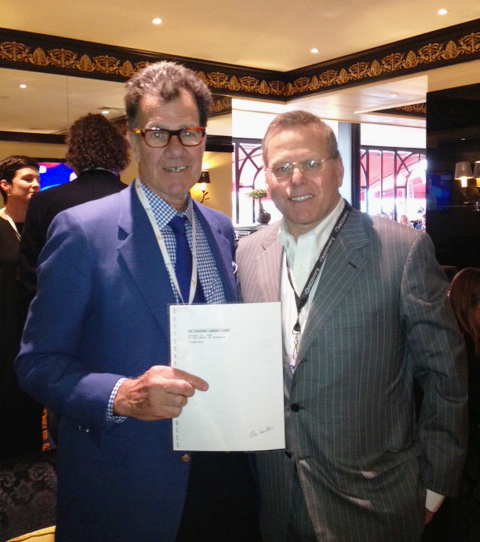 I served as senior consultant on the due diligence for Discovery’s first leap outside the U.S.  Discovery was barely making payroll in 1988, and yet its visionary key investor John Malone was already driving management towards a globally branded future.

The Year 1 revenues seemed ambitious at $3 million. We could not have imagined that twenty-five years later, Discovery International would be valued at $12 billion!!

As well as harvesting the low-hanging fruit of an expanding base of cab/sat subscribers outside the U.S., Discovery is using its free cash flow to acquire international operations with strong management teams.

Zaslav’s corporate acquisitions strategy has made a clear break with Discovery’s past at two levels:

We discussed Discovery’s long-standing goal of creating universally-appealing content that can be localized via presenters and local languages, so that it feels local.