Bill is a broadcast and cable veteran based in South Florida, whose company, Kismet Media Group focuses on talent-driven original content with leading brands, media partners and production partners, as well as distribution of International content in the Americas. Bill is also a Programming Executive for broadcast and cable platforms, including Tribune and Discovery Networks, and a Consultant whose clients have included BBC WW and Reelz Channel. 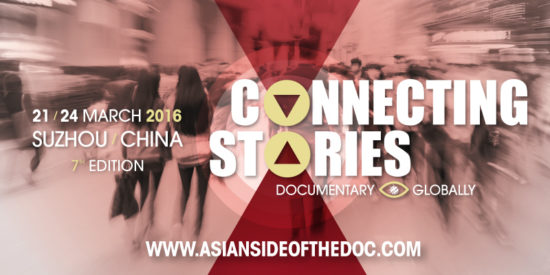 ASIAN SIDE OF THE DOC 2016
Dates and host city announced

The 7th edition of the international documentary marketplace in Asia, ASIAN SIDE OF THE DOC, will take place from March 21 to 24, in the water town of Suzhou also known as “Venice of the East” and the “City of Gardens” in China.

After Hong Kong, Seoul, Tokyo, Kuala Lumpur, Chengdu, Xiamen, the four-day factual event is hosted for the third consecutive year in China, one of the world’s fastest-growing markets for content owners, producers and broadcasters

Situated in the southeastern Jiangsu Province, about 100 km to Shanghai, the city of Suzhou has over 2,500 years of rich history with an abundant display of cultural relics, ancient bridges and canals. The classical gardens in Suzhou were added to the list of the UNESCO World Heritage Sites in 1997 and 2000.

Each year, Asian Side of the Doc draws more than 720 documentary professionals, including 140 decision makers, from Asia and beyond (40 countries) to its industry-leading market, designed to maximize investment and international co-production through a line-up of inspiring panels, unique networking events, a high-quality pitching forum and the added value of an exhibition space leading to real deal-making.

“We are delighted to partner with the vibrant city of Suzhou and the Jiangsu Television to keep on expanding our network of Asian broadcasters, in particular the Chinese regional channels increasingly open to international co-productions for documentaries” said Yves Jeanneau, CEO of Sunny Side markets.

The 2016 ASIAN SIDE OF THE DOC, organized with the support of CREATIVE EUROPE – MEDIA Programme of the European Union, will witness and feature new opportunities in the financing, co-producing, buying and selling of non-fiction and unscripted content across all platforms.

Other highlights will include the “China Pitch” on the opening day, March 21st, to showcase emerging talents and original Chinese stories selected from the Asian Side Training Week in Beijing on January 19-22, 2016.

The 2016 Asian Side’s call for projects will open mid-January for a month.

ABOUT ASIAN ASIAN SIDE OF THE DOC

Asian Side of the Doc is the first international documentary marketplace in Asia. Created in 2010, this annual event offers new business and creative partnerships opportunities for the international doc professionals on the dynamic Asian factual programmes sector now running in both directions, Asia to Asia, and Asia to the rest of the world. Now in its 7th year, Asian Side of the Doc’s objective of building a unified factual content market within Asia and bringing potential co-production partners together is notably achieved.