The Sundance Institute‘s Senior Consultant for its Documentary Program, Bruni Burres, analyzed the opportunities to secure funding from a number of foundations and film initiatives on a panel that we shared at the 2012 Asia Side of the Doc in Tokyo.

Gucci Tribeca Documentary Fund provides funding to feature-length documentaries that highlight and humanize issues of social importance from around the world.

Tribeca All Access seeks feature-length narrative and documentary submissions from established and emerging filmmakers whose team includes a director or screenwriter from a community that is traditionally under-represented in the film industry. 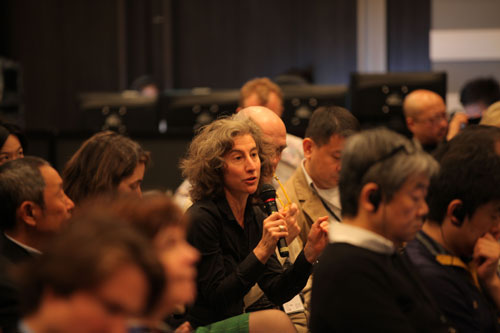 Bruni Burres has been working at the intersection between human rights and arts and culture as a curator, producer and consultant for the past 20 years, including serving as the co-founder and director of the Human Rights Watch International Film Festival.

Current clients include the Sundance Documentary Film Program, and the Open Society Foundations.