So here’s my own big lesson from watching Gravity and reading your report on the factual producers’ relatively negative reaction:

People do live and work out there, though … and a year or two ago, the Chinese did blow up a satellite and create a killer cloud of debris.

The science story was not entirely implausible – and the continuous, relentless situational life-or-death stakes made it gripping, thrilling.

All of which is why it won Best Director, Visual Effects, Cinematography, Music, Editing, Sound Mixing ….

But Gravity wasn’t even nominated for Screenplay… because the story was only OK. It was constrained by the options available in that situation, and became predictable. 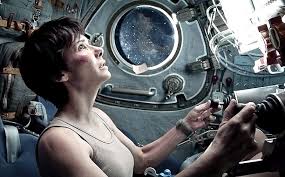 Where it really falls down is with the characters.

The lesson: without good characters, a strong science story is only sometimes enough to hold an audience… and is therefore, a hard sell.

It’s also true that if the story and the characters are weak, the science visualizations had better be great.

Which is easy when you have millions to spend – and not so easy on TV budgets.

I’m pretty sure that if the pictures, sounds, and physics in Gravity hadn’t been as riveting as they were, there would have been no nominations.

As for the old “space doesn’t rate’ thing, I re-versioned an 8×60 BBC series called The Planets back in 2003, and Science Channel still does marathons and it still gets a number.

Why? Because the characters are great, the stories are epic, and the animations are elegant.

But these days, with budgets being what they are, it’s all too easy to see a poorly written science story, with weak characters, and so-so CGI reinforce the negative stereotype.

So, particularly with science programming, the story and the characters had better be top-notch, or the program won’t work.

And I think it was the characters that put so many people off Gravity – because today, TV producers depend on good characters to carry a story.

And Clooney and Bullock were not great…

Paul Gasek is a long-time, Emmy-Award winning Science and factual producer.  He’s worked for the likes of National Geographic, PBS, Discovery Channel, and more, specializing in science and natural history storytelling. At present, he writes from his home office at Stony Brook Films, Cape Cod