At the invitation-only MIPDoc Co-production Summit, Woodcut Media‘s Kate Beal explored the three big ideas that are guiding her company’s successful strategy. Kate kindly shared her presentation with my readers.

We started out as a small UK-based Indie, and thankfully have been growing steadily over the past three and a half years.

I’ve been asked to give an ‘inspirational’ speech about surviving in the global landscape. I’m quite humbled to be asked as there are people in this room I admire enormously… who have created both amazing content and extraordinary global businesses…

So being very British, I’m not sure I can inspire but I do know that I strongly believe that there are opportunities out there for all sizes of producer… whether you’re a network-owned outfit like Raw or Lion, an indie powerhouse like Arrow Media or a boutique operation making brilliant films like so many people around the world. 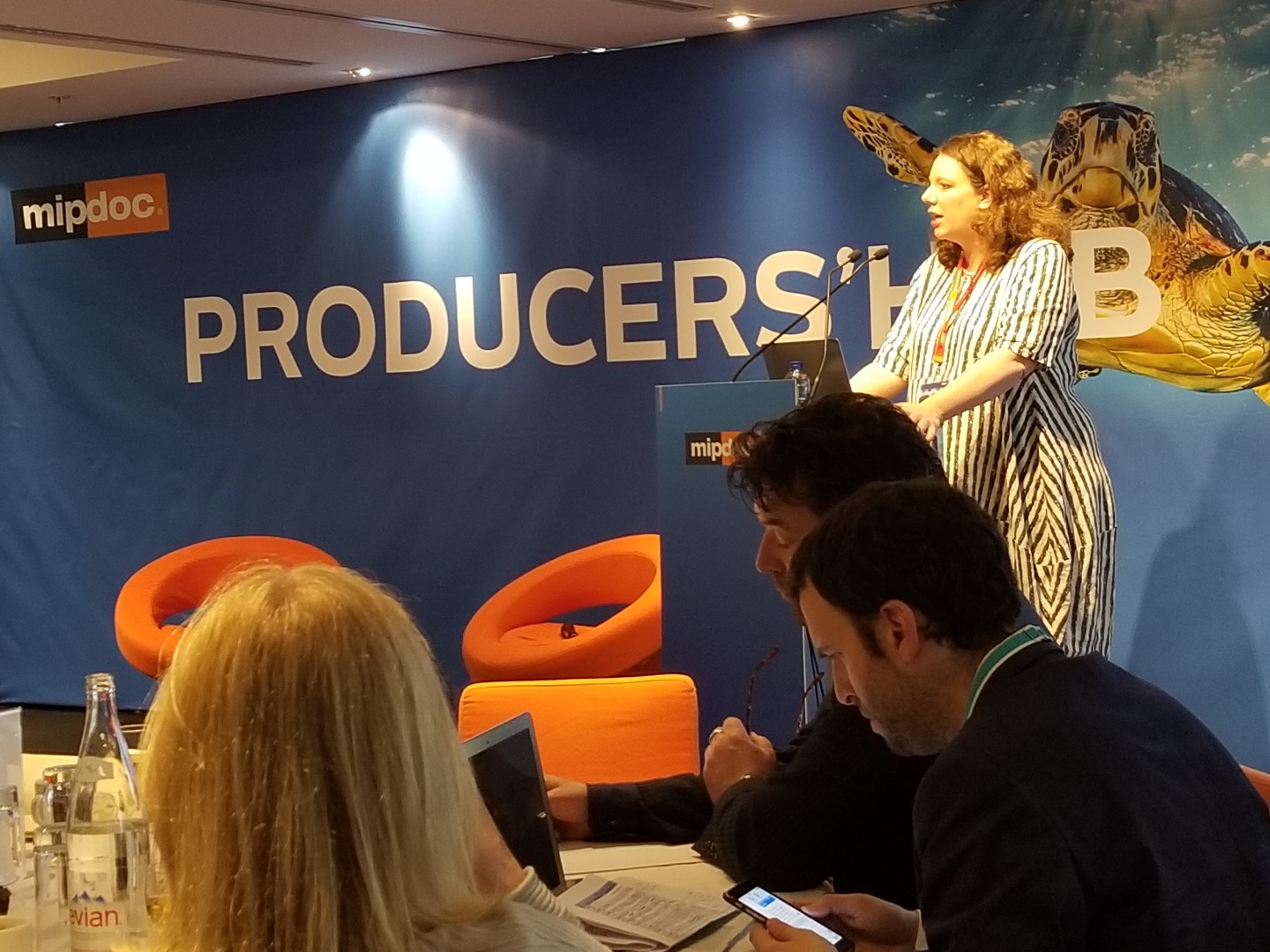 I believe it’s an exciting time in the unscripted landscape. If you look at it from a global perspective there are now more customers than ever! With creativity, a commercial approach and a collaborative attitude, independent producers cannot just survive – but thrive.

I won’t under play how difficult it is though… my goodness we at Woodcut still have a long way to go but I do passionately believe that the extraordinary hard work will be worth it as there is a world of opportunity out there.

Television production is a tough business and in the unscripted world our competitors are in their thousands. In the UK alone, there is a high turnover of new companies with at least 50% failing in the first two years. I don’t entirely know why this is but there are challenges every step of the way – no matter how good a programme maker you are.

I know from personal experience what it means to put everything on the line to make it work… When I set up my first indie I went for months and months without pay and even risked losing my house at one point so I could continue pursuing my goals.

But that kind of challenge gives you a focus like none other – and for me it means that in this business I make every moment count. And in particular I focus on three key words… Creativity, Commercial and Collaboration.

So… the first word… Creativity…

Creativity isn’t just about the programme making though… it’s creatively thinking about how to get the project to a greenlight position and this is about expanding your world and your customer base.

I remember going to my first MIPCOM in 2008. It was so very overwhelming. Quite literally the whole world of television was in the basement of the Palais. In those few days in Cannes I learned so much. Most importantly that there is a whole world outside of the UK… I don’t have to limit myself to just British broadcasters.

My tour guide for my first MIP was a Kid’s entertainment and Scripted producer… very different from the Factual world I was used to. I realised quickly that producers of kid’s content in particular packaged their deals in a far more creative way than we did in the factual space. 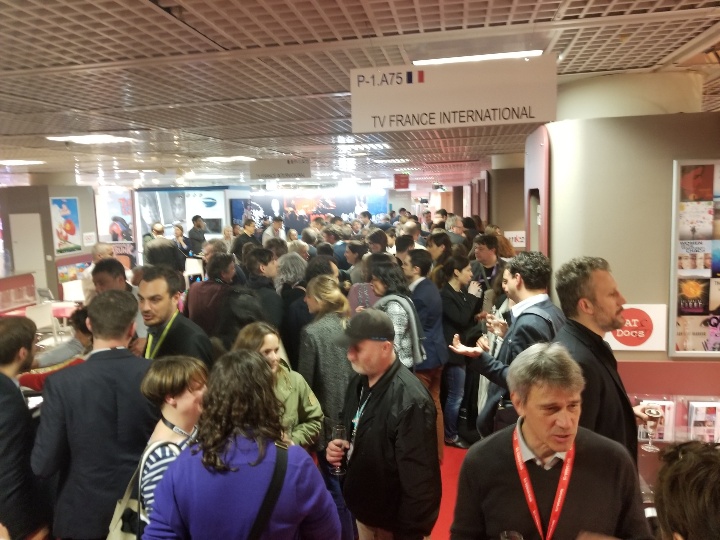 French industry drinks in the basement:
Buyers, sellers and the odd senior consultant networking at MIPTV

So from that point on I started thinking differently… I needed to take into account different ways of packaging the deals and also perhaps look at the content itself to ensure it had enough international appeal to make it attractive. When we launched Woodcut in 2014 I was able to put these ideas into practice.

I’m going to pause here to show you our showreel… this is a sample of some of the 150 hours we’ve made in the past three and a half years as Woodcut….

So the next word I’d like to talk about is Commercial… being commercially minded in an international market.

We know who we are and what we sell. And I think that it is important for any producer to be very clear on how they define their business.

By defining ourselves in this way we have provided clarity for our buyers. It also helps us as a team in our in-development. I know that a room full of creative people can come up with hundreds of great ideas…

However, I know that us developing and pitching a comedy panel show just wouldn’t make business sense and networks would definitely think twice before giving us money to produce one.

We have to understand what the market expects of us… and focus on developing in those areas… for now!

And being commercial is crucial when it comes to development.

Each case covered in the episodes is carefully chosen for either international name recognition or offers a story that translates into multiple cultures. After all, everyone loves a good story and that’s the heart of documentary.

And this is especially important when the funding of your project comes from different sources – not just the traditional commission.

This brings me on to the need for commercial thinking on how you put the package together to finance your project. More and more unscripted producers are using different funding models to bring the budget together.

For us we use four main ways…

Or sometimes it’s a combination of all four…

The first three funding models are pretty well used and well understood now. The private investment is newer… and still emerging. In some ways we are now emulating the film industry model with investors risking their money against a perceived value of a project.

For the investors, a success in the unscripted space will bring a quicker financial return than any other film or TV genre. Although the rewards will never be as high… We’re never going to produce a break out box office hit or the next Peppa Pig. However, the financial return is often steadier and more predictable. Attractive for any investor in this unstable financial world.

We are a safer bet.

But there is a catch… people are not just showering unscripted producers with free money.

Ideally any investor/producer partnership is an ongoing relationship. It may be other people’s money at risk but it’s also your reputation.


Finally, the last word I want to talk about is Collaboration…

As we’re at the co-pro summit it seems appropriate!

For me collaboration is essential to build your business. Whether that be collaborating with other producers, named talent, networks or distributors.

Collaborating definitely makes us bigger than the sum of our parts. It helps us punch above our weight. Co-pros often make the most noise.

It goes without saying that collaborating with a number of different networks on a project has huge benefits.

But I wanted to specifically talk about collaborating with distributors and give an insight into how, if you find the right partners, they can become a vital part of your strategy.

The most valuable lesson I’ve learned about distribution is that it’s not something to talk about at the end of production once the show has been made. It’s not just about handing over a finished tape and waiting for the royalties to come in. Obviously, that works in some instances but if you are wanting to make an impression internationally it is logical to get the international perspective on an idea as early as possible.

We have a small number of distributors who we trust to have early development discussions with.

After all – it’s the distributors who are on the ground on a daily basis talking to networks across the world. We may be an expert at what the UK wants – the right distributor is an expert in what the world wants!

A brainstorming session with a distributor can bring an entirely different perspective on development. They ultimately help you make your idea more sell-able.

A good distributor can also help build a brand. For example, our COMBAT franchise has been carefully developed from the very inception of the idea in collaboration with the distributor.

The commissioning network – History in the UK, clearly had the lead editorial but with the help of TCB we ensured that there would be enough in the series to appeal to other key territories across the globe.

Their input makes it work commercially for us – and ultimately gives us a returning franchise. Keeping us in business and giving those foundations for growth…

So, I’m aware that everyone here is ready to network and start sharing their next projects… the building blocks of their growth…

To sum up in brief… be Creative, be Commercial and be Collaborative… and the world is yours! I don’t believe in challenges… just opportunities.

Thank you so much for your time.