From ‘Modern Witch Hunt’ to ‘Killing in the Family’: This week Eli Brown covers 11 more pitches – and the commissioners’ responses – at IDFA Forum.

Read on below to discover which film wins ‘Best Pitch at IDFA’ … and what happens when commissioners put themselves on the line and pitch their own documentary concept.

The Reality Empire: Two Paths to the Throne

New Yorker magazine recently profiled a very different kind of struggle to the top of the Reality mountain:  Ken Auletta’s profile is of Shine’s Elisabeth Murdoch. 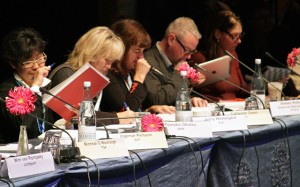 (Photos: Thanks to IDFA)

The trials and tribulations experienced by Robert Cooper, the lead negotiator for the Serbian-Kosovo diplomacy project, as he worked with those countries on their journeys towards membership of the E.U.

A personal film  revisits the murder of the director’s brother and becomes a window on to the black middle class in America.

THE KILLING FIELDS OF SRI LANKA

Follow up on a journalistic report about the genocide in Sri Lanka that occurred under a media blackout.  -But the filmakers have footage that was smuggled out to reveal the atrocity. 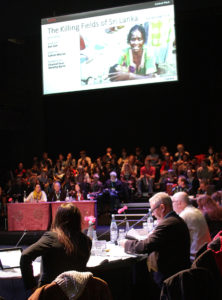 A SHTETL IN THE CARIBBEAN

The “Moderator’s Hat” Pitch: This was a project picked out of a group of business cards placed in a hat. As such, there was no trailer ready and the pitch team talked for the 8 minutes about the genesis of their project, an examination of an enclave of Jews in the Caribbean.

The story of Louis Sarno, a white man who moved to the rainforest of Central Africa to live his life with a pygmy tribe. As his health begins to fail, he decides to take his oldest son to New York City to contemplate his and his family’s future.

Made by the team behind “Enjoy Poverty!” They build an art center in Africa as a way of pointing out the hypocrisy of showing problems in areas of the world without allowing the art to benefit those areas directly. Very “meta.”

Personal and intimate film about a gangland godfather in the Cape Flats area of South Africa.

The team behind “A Film Unfinished” investigates the footage that exists of the storming by Israeli forces of a flotilla of activists heading for Gaza. The Army wanted to disrupt all media transmission, but some footage did survive the encounter.

A horrifying and intriguing story of murder, Satanism and society’s scapegoats. It follows the prosecution of a mother accused of murdering her husband.

Kyoko goes behind the headlines of a train crash in Japan that killed 100 people – because of an 80 second delay in the train schedule. She unravels the culture of punctuality and speed by following the journey of two survivors.

As if out of respect for the topic, Miyake’s pitch came in a few seconds early.

Follow-doc about 3 characters tracking human rights abuses from the makers of “Born Into Brothels.” They’ve been shooting with unparalleled access in Libya, Syria and in the homes of their characters.

Eli Brown is an independent producer and post-production consultant with 15 years’ experience creating broadcast programs. He is based in New York. Visit him on the web here.

We are pleased to have Documentarytelevision.com as a partner again this year and are offering an exclusive association discounted ticket for $649.

Don’t miss out on doing business with key industry players, including:

Register today and don’t miss out on this event!