Unscripted producers are agitated by a legal conflict between Discovery and an established production company.

Here is the opening and the link to the entire article.

A legal battle over accounting practices that has enveloped indie company LMNO Prods. has stirred a hornet’s nest in the tight-knit community of producers of unscripted television.

This story first appeared in the August 23, 2016 issue of Variety. Subscribe today.

A number of prominent producers are dismayed at Discovery Communications for what they see as ruthlessness in its handling of a lawsuit and federal investigation into allegations of pervasive fraud in LMNO’s business operations going back more than a decade.

Beyond the support they’ve expressed for LMNO leader Eric Schotz, producers are on edge that fallout from the investigation could leave them vulnerable due to financial practices regarding production expenditures that have long been accepted as the industry norm.

Meet the Budget Whisperer:
A Production Budget Template for a Documentary Special, 2016-17 Edition

How do you present a 100% credible production budget to a network or funder? For my clients’ projects, I work with the Budget Whisperer — the respected senior consultant, Elizabeth Ventura. Elizabeth has worked for 12+ years as a Production Manager on programs for dozens of US networks. 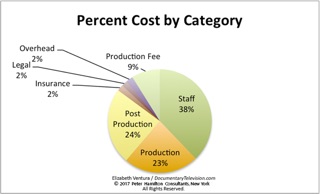