This year, the Sundance Film Festival screened 119 feature-length films from 32 countries, including works from 51 first-time makers.

These works were selected from: 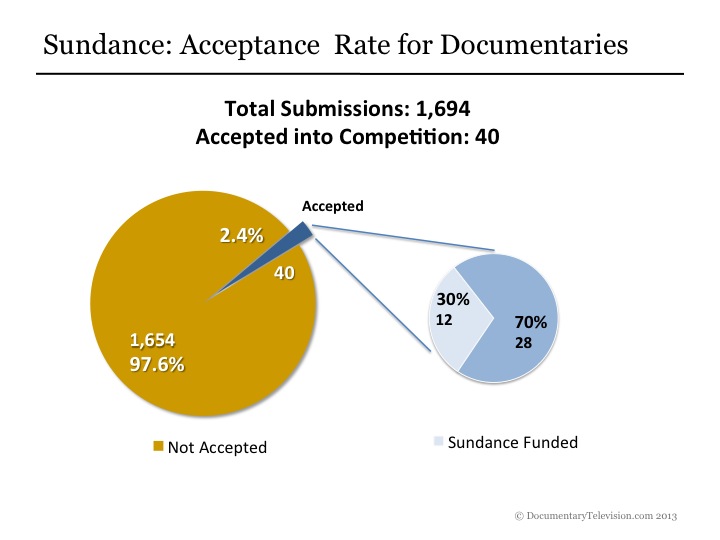 A total of 1,694 feature documentaries were submitted.

Forty documentaries were selected – a success rate of 2.4%!

Of the 40 selections, 12 had received prior funding from Sundance:

The accepted docs that lacked a prior Sundance imprimatur were:

A River Changed Course
Blackfish
Blood Brother
The Crash Reel
Cutie and the Boxer
Fire in the Blood
Google and the World Brain
History of the Eagles Part 1
Inequality for All
Life According to Sam
Linsanity
The Machine Which Makes Everything Disappear
Manhunt
The Moo Man
Muscle Shoals
Narco Cultura
Pandora’s Promise
Pussy Riot–A Punk Prayer
Running from Crazy
Salma
Sound City
The Stuart Hall Project
The Summit
Twenty Feet From Stardom
Valentine Road
We Steal Secrets: The Story of WikiLeaks
Which Way Is the Front Line from Here? The Life and Time of Tim Hetherington
The World According to Dick Cheney

After Sundance selection, the next needle to be threaded by documentarians is distribution:

My Sole Appearance at Sundance…

(Thanks to David Rosen and George Mokhiber for research.)