Which U.S. Factual channels were among the biggest gainers and losers of prime time viewers year-to-year? 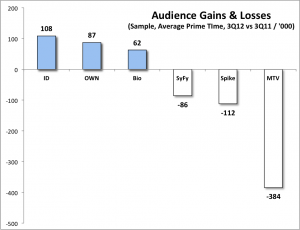 Our quarterly, high-level snapshot is prepared with the assistance of John Morse, president of research firm Byron Media.

What?? The Factual Tide Fell!

The International Documentary Buyers’ Guide is an invaluable resource for producers who are working on strategies to pitch ideas or who are selling completed programs to channels.