I’m very proud to be co-EP of a wonderful Smithsonian Channel special that covers Jonas Salk’s race to defeat the dreaded disease of polio.

Bill Gates kindly agreed to be interviewed for our film, and the Bill and Melinda Gates Foundation supported our efforts.

I’ll soon cover in detail the fascinating story of how this project evolved, including our strategy which was co-hatched with Tim Sparke from Mercury Media International, and what it all means to DocumentaryTelevision.com and to me personally.

In the meantime, here is my conversation about A SHOT with Smithsonian’s David Royle which was recorded during our panel at MIPDOC 2013: 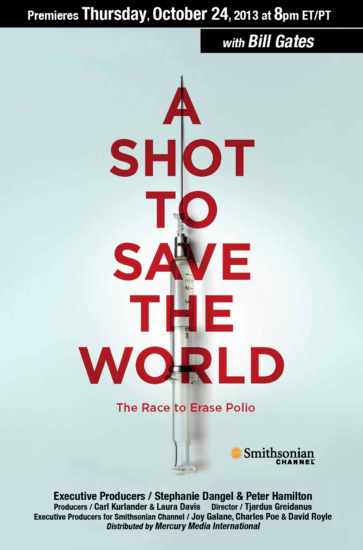 NEW YORK, September 25, 2013 – It was a disease that paralyzed America — a terrifying epidemic that shut down playgrounds, parks and public pools, while leaving tens of thousands of victims in wheelchairs, iron lungs… or dead. A vaccine, developed against all odds, gave new hope. And now a coalition of global health experts is determined to eradicate the disease from the planet.

A new hour-long Smithsonian Channel documentary, A SHOT TO SAVE THE WORLD, premieres on World Polio Day, Thursday, October 24 at 8 p.m. ET/PT. This powerful program reveals the dramatic story behind one of the greatest feats of medical science, the development of the first polio vaccine.  It features interviews with Bill Gates, who has made world polio eradication one of his main goals, with polio survivors and with members of Dr. Jonas Salk’s pioneering medical team. It is an extraordinary story that spotlights one of the most remarkable examples of how much can be achieved when a nation—and a world– pulls together to defeat a common enemy.

By 1952, polio was one of the most serious communicable diseases in the U.S., permanently crippling more than 60,000 children a year. Salk and his team worked on their controversial “killed virus” vaccine in a tiny basement lab, three floors below a polio ward filled with kids in iron lungs. His work was privately funded, literally dime by dime, through the “Mother’s March” of the March of Dimes.   It was an unprecedented public campaign and a seven-year battle against medical orthodoxy, lack of funds, and the virulent spread of the most terrifying disease in America.

Finally, on April 12, 1955, the Salk vaccine was declared “safe, potent, and effective,” and cameras captured the international jubilation of the announcement.

A SHOT TO SAVE THE WORLD describes not only the struggle to create the Salk vaccine, but its extraordinary success. Five decades ago, polio was an American scourge.  Today it is believed that there are only 250 cases left in the world. Polio was rampant in 125 endemic countries in 1988.  Today it exists in just three; Afghanistan, Nigeria and Pakistan, but the final stretch is often the hardest in these battles.  Groups like The Bill and Melinda Gates Foundation, Rotary International (which has raised more than $1 billion in a grass-roots campaign), the World Health Organization and Unicef are continuing the struggle until the disease is finally eradicated.

A SHOT TO SAVE THE WORLD also reveals Bill Gates’ deep personal commitment to fighting polio. Gates, whose Foundation has recently committed $1.8 billion to the cause, reminds viewers that there is only one disease that has been eradicated from this planet: smallpox.  Gates believes that eradicating polio will boost infrastructure and confidence to go after other global health challenges.   As Gates emphasizes in A SHOT TO SAVE THE WORLD, vaccines are the best investment people can make in public health.

Even with polio on the brink of global eradication, the final push will not be easy. A SHOT TO SAVE THE WORLD illuminates the urgency of that mission. The struggle to eradicate a killer, which began in a basement lab and now stretches around the world, won’t be fully won until polio is completely wiped from the Earth. 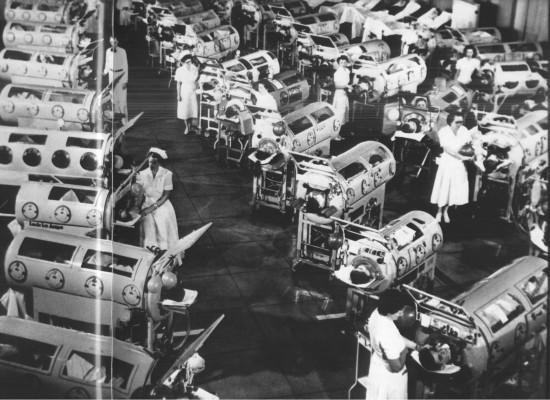 A SHOT is distributed by Mercury Media International.