The cost of developing programs has been ballooning for both networks and production companies.

In ‘MBA terms’ I came to see the current inflated state of the development process as a ‘market imperfection’ for which there should be an immediate and track-able solution that lowers the cost and risk.

My researches led me to Media Predict, a company with a proven, new online ‘prediction market’ methodology for qualifying the likely success or failure of television program concepts.

And I recently set up the BLINC -Media Predict partnership in London: we are already working on a promising trial with a leading UK network.

This week’s post: my introduction to an exciting, new addition to the program developer’s toolbox. To learn more about Media Predict, send me an email.

“Nobody knows anything,” William Goldman famously wrote in Adventures in the Screen Trade.

“Not one person in the entire motion picture field knows for a certainty what’s going to work. Every time out it’s a guess.”

The phrase has become a truism in media.

Despite our modern technology and research, even today a huge amount of new content flops – and production companies and programmers are left stabbing in the dark when looking for their next hit.

But a new research company, Media Predict, is proving that – collectively – we might know something after all.

By tapping the so-called “wisdom of the crowds,” Media Predict is making steps toward cracking the mystery of finding good content.

How they do it may raise eyebrows. In a moment I’ll look at the blend of quantitative and qualitative research they produce through – you’re hearing it right – something a lot like futures trading.

But the company’s results may be all that executives need to know: 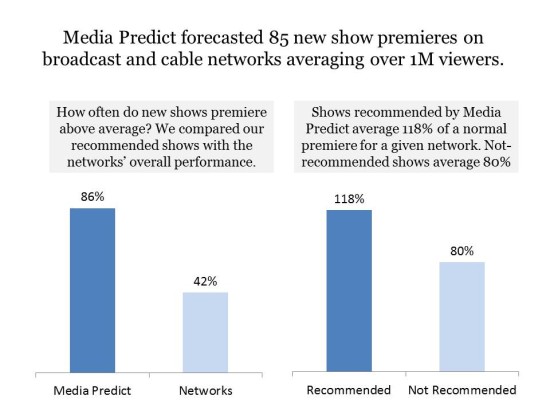 Is it a crystal ball? No.

Of course, research is supposed to have all of these problems solved.

In light of that, Media Predict threw traditional research methods out the window.

The idea is that profit motives make every participant tell the truth, instead of just clicking through a survey willy-nilly. Then – just like on Wall Street – market dynamics take over.

This “prediction market” methodology has been producing results for some time.

“The Following” – Spotting Winners … and Duds

But Media Predict is even better at spotting shows destined to fail.

The tool is not just for showpiece programs on the big nets:

Nobody knows anything, the saying goes. And it’s been hard to dispute. But Media Predict is indicating that – with enough people, working collectively – the marketplace might know something after all.

The Media Predict methodology is applicable to networks, larger-scale production companies and distributors, investors, governments, foundations and non-profit funders, and other users of qualitative and quantitative research.