The non-scripted tide keeps on surging. And surging. 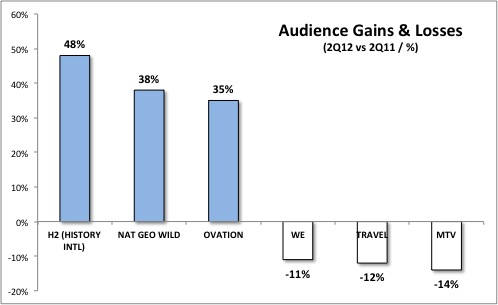 Our quarterly, high-level snapshot is prepared with the assistance of John Morse, president of research firm Byron Media.

The largest audience gainers in our sample are (‘000):

Travel lost 12% of its audience.

The Discovery Channel has become a fixture in the losing category.

The Factual Tide Keeps on Rising and Rising…

For scale purposes, here are 2Q’12 prime time averages for a selection of channels that screen reality and docs…