At last week’s Realscreen Summit, the turnout at our excellent panel on audience research indicated a strong interest by unscripted professionals in research tools and how they impact programming decisions.

Our discussion did touch on second-by-second ratings. Although Super Bowl XLIX is off our factual content focus, this fascinating chart from TiVo Research showcases a tool that is relied on by programmers and audience analysts across all genres. 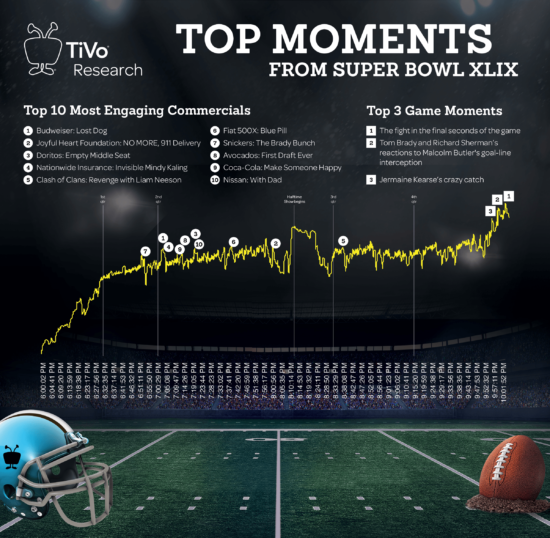 XLIX: Year of the #EmotionBowl

Emotions run high on the field and in commercials, but comedy is still king

SAN JOSE, Calif. – February 2, 2014 – TiVo Inc., the source of second-by-second data insight into Super Bowl® viewers’ most-watched commercials and moments*, today released this year’s top most-engaging Super Bowl commercials and moments from the game. While “Deflategate” may have dominated much of the talk leading up to the game, the recurring theme of comedy lost no air – despite the emotional spots attracting attention.

This year there were more serious, dramatic and sentimental spots than in previous Super Bowl broadcasts – including Budweiser’s ‘Lost Dog’ that won the top spot – but overall, comedy came through again with five of the top 10 spots having comedic appeal. This year, a public service announcement (PSA) ranked second with game viewers, ranking second among the top spots.

The top ten commercials and promotions from Super Bowl XLIX according to TiVo:

“From start to finish this year’s Super Bowl was full of emotion, but humorous spots still resonated the most with viewers. Our research highlights the most watched nail biting game moments, the always present humorous ads, as well as more substantive ads and a halftime performance of a lifetime,” said Tara Maitra, Senior Vice President, General Manager Content & Media Sales at TiVo. “TiVo Research’s second-by-second behavioral insights into Super Bowl viewership will again provide networks and brands access to the big data they need to optimize media efficiency.”

For the fifth year in a row, TiVo found viewership for the half-time show exceeding that of the overall game. Katy Perry did not disappoint, as the entire show was a jaw-dropping performance with superstar guest appearances. From fireworks inside and out of the stadium to Perry being suspended on a shooting star, Perry’s performance kept eyes glued to the television.

The top re-watched moments from the game itself were

TiVo has been tracking and releasing its unique Super Bowl data for over a decade. Analysis of the past most-engaging advertisements and promotions with viewers shows that many have been comedy-based.

The top commercials of past Super Bowls include the following:

The Super Bowl commercials can be viewed via your TiVo unit in the Super Bowl Commercials Collection. To the find the collection, click Browse TV & Movies and then click on the New & Notable category.

To view the Super Bowl commercials online, visit iSpot.tv, the only platform to track TV ads correlated with digital responses in real time.