The ‘Big Chart’ of unscripted tv was a highlight of the AIDC Conference in Adelaide presented by Nat Geo Channels CEO David Lyle in his keynote.

His graphic addresses the evolving landscape of Unscripted tv entertainment. It shows how unscripted tv show formats and sub-genres are being forever blended and hybridized into new categories. 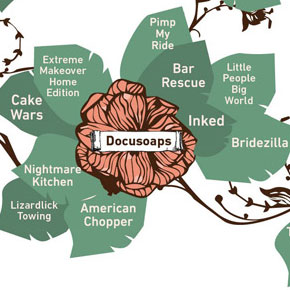 When we caught up with David Lyle after AIDC, he added:

“What I have tried to do is demonstrate how shows and sub genres “grow” out of one another and like a climbing rose twist and turn before blooming anew.”

“I added Sitcoms and Dramas (and game shows) on the extreme right to reveal, if you will, how unconstructed things like documentaries and current affairs stories have moved towards the more constructed.”

“The show examples that appear as leaves are a strange mixture of US, Australian and occasional British titles.”

“There are, as I look at it again, some bloopers… How Jungle Gold became a Celeb Docusoap or House got to be next to Only Way is Essex is a mystery. What Martha Stewart is doing as a Game show is equally bizarre.”

“But I would encourage your readers to add and subtract (and even move around) some of the flowers/sub genres or leaves/shows.”

As the pendulum swung away from government funding of public television documentaries and the Arts, many Australian producers hung on to a sense of entitlement longer than in other markets.

I often heard rants against the networks and funding agencies for not embracing the often issue-driven projects unscripted tv projects that had earned a nice living for many producers in the ‘Eighties and ‘Nineties.

At AIDC 2013, there was more acceptance that factual television has shifted towards entertainment, and that producers need to be open to new formats and unscripted television genres if they want to thrive.